George scripts can be located anywhere in your computer.

Those George Scripts are in fact usual ASCII text files and have a “.grg” extension.
It is possible to edit or create them with any text editor like Notepad from Microsoft Windows, Text Edit from Mac OS-X or Gedit from Linux.

The scripts are in theory working on PC, Macintosh or Linux, whatever the computer used to create them. 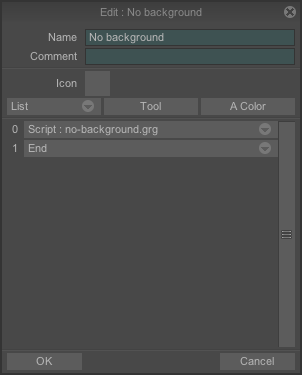 To use one of the George Scripts at your disposal, just follow the steps below:
_ open a custom panel
_ create a new button on this panel
_ select the action: -Set script- for this button
_ select a file with a “.grg” extension in the file requester

Once finished, if you click on the just created button, the George Script will then be launched.

Once a George Script has finished its programmed tasks, the Undo option of the TVPaint Animation main panel allows you to cancel all the changes it has generated.