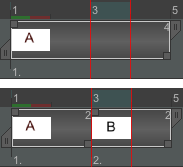 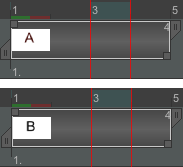 When it is not checked (

), the exposure cell which is modified, won't create a new instance. The new image will be copied in the head of the instance

It is also possible to force the splitting of an instance. Place the current image at the position you want to split the instance, and select the Image > Instances > Break Instance option.

As an alternative, you can also make the current image the instance you want to split, right click on it and select the Exposure > Break Instance option.