How to use instances for animation?

Now, let's study a new example: in our animation, the elephant falls from the top of the screen, then gets up, and finally leaves the screen by walking to the left. 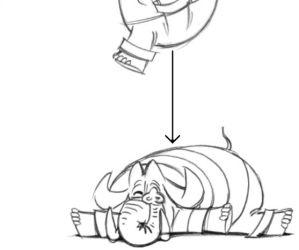 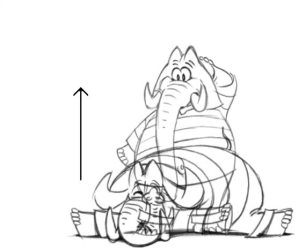 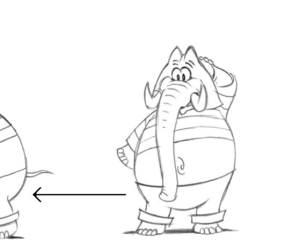 We can already and easily distinguish four key images from which the inbetweens will be drawn.

Let's re-use the method introduced earlier in this lesson, but with instances:

* First create a new Animation Layer and duplicate the current frame three time. To do so, right click on the instance to open a contextual menu. Select the Insert Images menu and then select either the Append Images (after) or the Duplicate Images option:

You’ll be asked for a value: simply choose to append three images or to duplicate the first image three times.

* Once you have four empty instances on the Timeline, you can draw the four key images in each instance.

* Just after this operation, you can adjust the timing by choosing the appropriate number of exposure cells in each instance.

If you need a quick preview of the animation when drawing, it is advised to use the keyboard’s [Space bar].

* Once this task is finished, we can break the four existing instances in order to draw the first inbetweens (the inbetweens are drawn in blue for better readability).

You can use the Light Table option to help you during the drawing process. It will take only the head cells into account (you can learn more about the Light Table by reading lesson 05)

* Now we can break, move and resize again the existing instances in order to draw the second series of inbetweens, as you can see in the screenshot below:

At any moment of this process, you can, by only a few mouse clicks, change the number of cells of your instances, and then improve the whole timing of the animation.

* Continue the process by breaking again the existing instances and by adding inbetweens. Stop it once you are satisfied with your animation.

To finish, here is a quick overview of the steps which were needed to create the animation from the first to the second key image:

The blue « I » below shows where the last instance was broken (ie: split) into two instances. 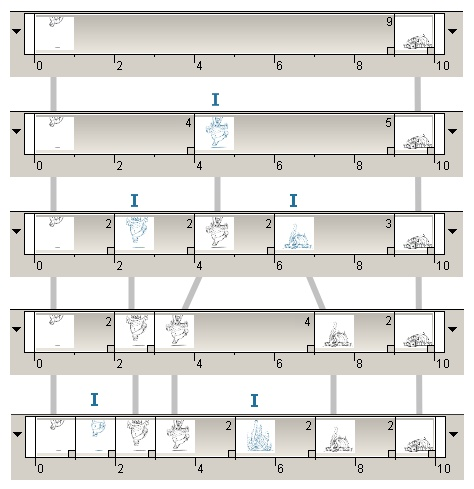