The notion of Animated Brushes

* Create an Animation layer of 10 images, then create a bird with a different wing position in every image of the layer (see timeline below).

You can use the light table (lesson 05) to help you in the making of the animated brush.

* Select all the images of your layer.
* Carry out a rectangular brush cut in a size similar to that of the image.
* TVPaint Animation will ask you if you wish to cut an animated brush via a small window.
* Answer yes.

You have just created your first animated brush !

We will soon be able to use it in the current project or in another project (in the example, we are going to use the same project, used in lesson 4) :

Check that you are working in color mode then click several times anywhere in the blue sky.

This is the result 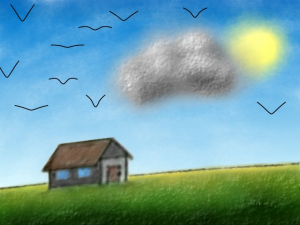 The birds you have drawn before have become your brush «each in turn» as you place them on the screen!

A few words on parameter setting for animated brushes:

The images in your animated brush may appear in various ways :

Other modes also allows you to modify the animation with a connection with your stylus, following the pressure, the speed, the direction, the tilt, the twist, the azimuth and the altitude. You can also invert those connections (which we already studied in Lesson 10).

All other options and parameter settings for the brushes studied previously (modification of size, opacity, direction) also apply to animated brushes …

Reproduce an animation from an animated brush

Now, imagine you want to re-use your animated brush as an animation, frame per frame.

* First create a new project in the same dimension than your animated brush
* In an layer, create as many instances as images composing your animated brush (10, in the present case).
* In the Tool panel, click on Reset to reset your brush's parameters. Check also if the animation is in Loop mode.
* Click in the center of your first instance, in order to apply the first image from your animated brush (do not draw ! Just click once)
* Now select the next instances (not the first one)
* And press [Enter]

All images from your animated brush are applied, frame per frame, on each instance.