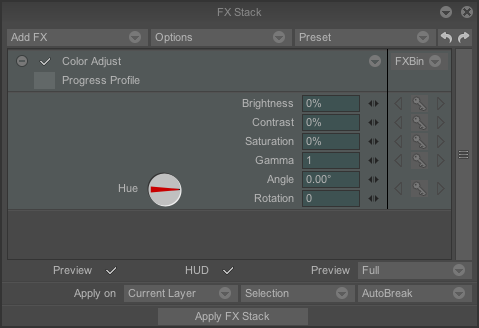 We'll keep the image from the beginning of this chapter and study the Color Adjust effect shown opposite in detail.
This effect uses the traditional notions of color modification for drawing and photo touch-up software packages:

* The Brightness parameter is used to increase or decrease the global brightness of the current image or video (use negative values to decrease brightness).
In other words, all the pixels present are either changed over to the black color or the white color. 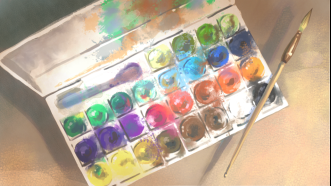 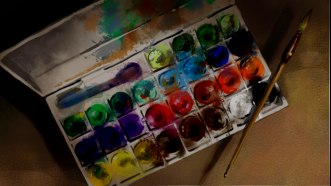 * The Contrast parameter, if increased, will accentuate the luminosity differences between the light and dark areas. When decreased, it will reduce them.
A setting close to 100% will only make the primary colors appear, as well as black and white. A setting close to -100% will make the image or footage almost entirely gray. 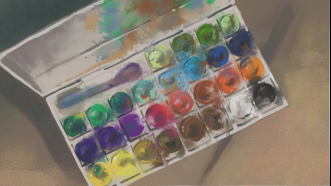 * The Saturation parameter accentuates or reduces color vivacity. A setting close to 100% will reduce the number of pixels close to the gray colors while reviving the colors, a setting close to -100% will produce a gray drawing. * The Gamma setting is often used for photo touch-up but also enables lightening or darkening an image without leaving the impression that a dark or light sheen was placed over it. Its value may vary between 0.01 and 5. Below you will find an example of the difference between a gamma reduction and a reduction of the brightness :
Reducing the Gamma by half only slightly affects the pixels making up the paint and the background: the latter remain bright and clear.
Modifying the Brightness to -50% gives the same pixels a darker hue. * The Angle parameter enables rotation of colors at the angle of your choice around the color wheel (see below).
For example: going from angle 0° to the angle 90° will transform the orange colors in the image to green, blue to purple,…etc. 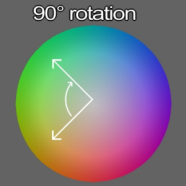 Original imageRotation of colors of 90°The color wheel

* The Rotation parameter reflects the number of turns around the color wheel before arriving at the chosen angle. This allows you to make the colors vary in a time cycle, which is sometimes useful for colored logos.
In the example below, we start with a blue TVPaint logo (R=0, G=0, B=255), placed on each image of an animation layer comprising forty-eight images.

The logo changes color in cycles, going twice in a row through the colors of the color wheel.