Inversely, any pixel on the screen may be broken down in each of the two coordinate systems. Modifying the color of a pixel therefore means you modify the values of its components. 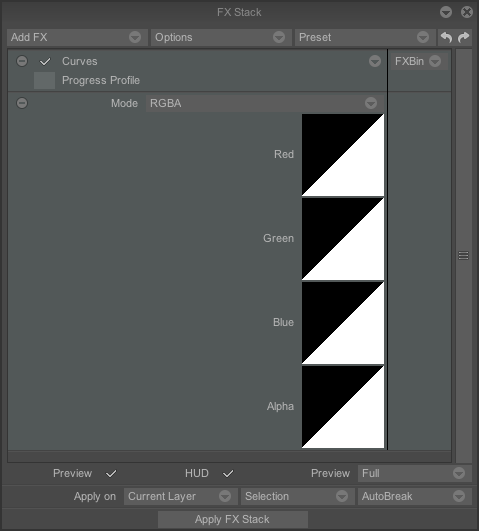 The Curves effect enables precise management of these modifications: the Mode popup menu offers a choice between the two systems described above.

Let's go, for example, into the RGBA system and take a look at our image. Next to the name of each component we find a miniature profile, comparable to those we encountered when studying the drawing tools and acceleration of an effect.

Click on the Red miniature profile to call up the edit profile window. 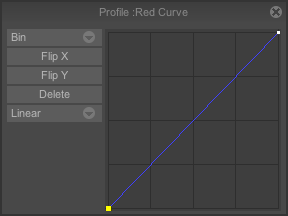 The options proposed are traditional: flip the curve along the "X" or "Y" axes, use pre-defined curves, save the settings, modify interpolation of the points…

Let's take the curves below as examples:

* In the second example, the luminosity of every pixel remains unchanged.

* In the last example, any pixel with a luminosity value between approximately 64 and 192 will turn black, the others remain unchanged.

We have just studied the luminosity curve in detail. Now it's up to you to work with the other curves and use them to the advantage of your projects.