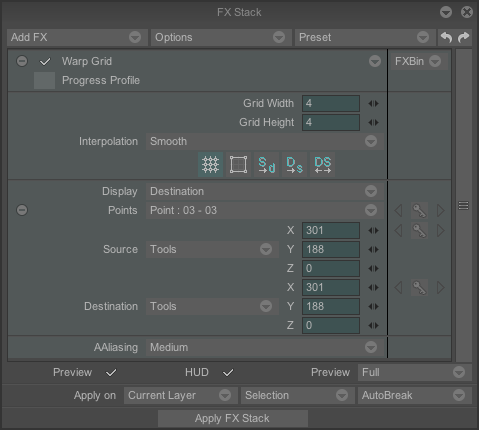 The warp grid is an extremely useful animation tool and is capable of distorting the images in time according to the criteria of your choice.
The warp grid effect, when correctly used, can produce quite spectacular results: wave movement, 3D rotation of faces, movement of hair blowing in the wind, etc... (below, you will find a summary overview of the possibilities proposed). 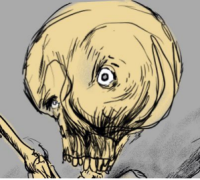 Once the effect has been placed in the FX stack, a grid is displayed on the current image.

Some hints for beginners:

* The use of two grids will be necessary for your effects to work correctly: these grids are referred to as Source and Destination grids.
The Display popup menu is used to select on which of the two grids you intend to work. 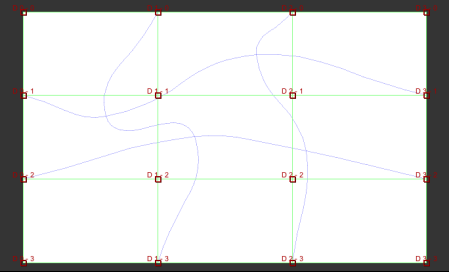 Display of Source and Destination grids (the current grid is green, the other is blue)

* Modification of an intersection in the Source and/or Destination grid distorts the current image accordingly.
The image is distorted, stretched or contracted over a narrower or wider area on the screen so that the points on the source grid of your initial image are moved to the same location as the points on the destination grid.
Below, source and destination points on a grid with the resulting distortion. 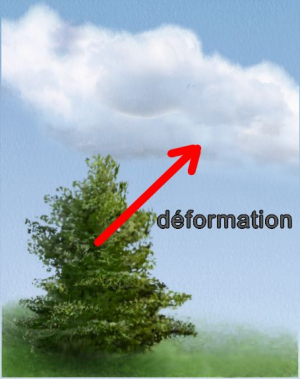 * The Point menu is used to edit each grid point present on the screen. The latter may be identified by their position on the grid (see below). * When this option is enabled, each intersection point of your grid (source or destination grid) may be moved in space along three axes (width, height and depth) the effect of which will result in immediate distortion of the current image.
You may also use the predefined paths to manage intersection movement. * It is possible to select several intersection points when the HUD is visible by drawing a rectangle inside the HUD. Once this has been done, it is easy to carry out all movements with a single click and slide on an intersection. * It is possible to choose an intersection interpolation mode (linear, spline or smooth) in the first effect popup menu (see below). If the interpolation mode chosen is Spline, use of the [Shift] key when moving the handles enables movement of one handle at a time.

When the second icon is selected, it is possible to distort the current grid as a whole by rotating it or by modifying its dimensions (see below). Swap the source and destination grids

This option is practical when creating a distortion opposite to that of the current distortion.
Below, the rear end of the arrow represents the Source point of the grid and the arrow tip corresponds to the Destination point. The AntiAliasing parameter in the last section allows to smooth the border of the image when this one is applied on the project. The options are None, Medium and Best.

Distortion of the current image in time.

We just saw how to distort an image in space using the source and destination grids. To distort the current image in time as was done for the "skull.tvp" project, you must:
* Duplicate the latter along the entire layer.
* Unactivate the previsualization of the effect (use the menu at the bottom left of the FX-Stack)
* Set the display option on Source.
* Pay attention to place intersections of the Source Grid at all strategic points on the image : eyes, teeth, etc … and ensure the grid covers the lines of your drawing.
* Copy the Source Grid to the Destination Grid.
* Reactivate the previsualization of the effect.
* Set the display option on Destination.
* Make the Destination Grid slightly different from the Source Grid for at least the first and last frames of the animation layer and then create the corresponding keyframes.
The result is a distortion, and consequently, a movement which takes place over a period of time. The method described above is not the only way of using this effect. Many others exist. You should try them out and share your impressions in the on-line forum.