The Emitters > Particles tab is used to manage the particles projected by the emitter.

The Particles popup menu enables creation of one or several sets of particles. Several types of particles may be emitted: see the pre-defined examples (sci‑fi > galaxywarp), (party > magic candle) or (pyrotechnic > explosion-b) to convince yourself. 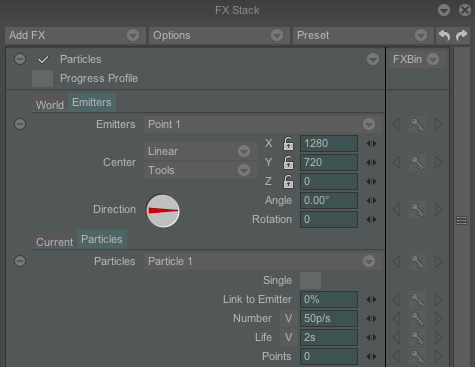 All particles appear, move along the screen and then disappear again. The time the particles move is referred to as the Life span of the particles.
The Life parameter is used to adjust the particle life span in seconds:
- it is short for fireworks : party > magic candle
- it may also be long: nature > fog.

When the Single box is checked and one particle has been emitted, no other particle will be emitted before the last particle has reached the end of its life, whether it is still on the screen or not.
The pre-defined example (object > golf shot) is ideal for testing this option.

Let's assume that the Life span of our golf ball particle corresponds to the time it spends in the air (once the ball has landed, it is no longer possible to see it in the sky and it is too far away from the field of view to see it on the grass from afar).
If you check the Single box, a new golf ball will be shot only when the first ball has landed, independent of the fact whether the latter has left the screen on its trajectory or not (and even re-entered it on the same trajectory … see below). 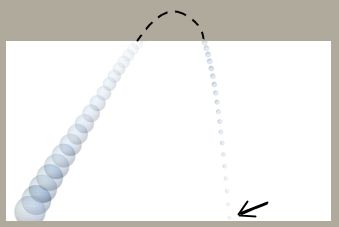 Shooting the second ball when the first has landed (i.e. at the end of its life …).

The Number of Points is only valid with the emitters line, rectangle and ellipse.
It is used to distribute the areas from which the particles are emitted along the contours of the emitter you are using.
Below, the particles of the pre-defined example (party > stage lights) are used with a Line type emitter then with an Ellipse type emitter. 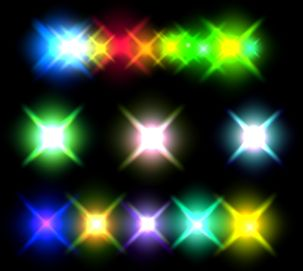 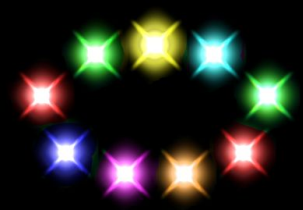 A parameter referred to as Link to emitter is present in this tab: it is used to define whether the particles will follow an emitter or not when it moves along the path chosen by you.

1st example: a steam engine was drawn on the screen. The Keyframer effect was used to simulate steam engine movement from left to right.
A Pixel tracker was used to create a path which follows the engine's chimney. Therefore, when the train moves, an emitter following this path will always be at chimney level.
In the images below, the smoke particles are linked with the emitter which is the engine's chimney set at 100%. The movement of the smoke is not natural.

In this drawing, the parameter Link to emitter is 25%. This time, the smoke movement is correct.

2nd example: the beacons below, as they are particles, are necessarily linked to their emitter: the roof of the police car. They move at the same time as the car when it is driving. The Link to emitter is therefore 100 %.