This tab is used to manage the properties of the particles themselves. 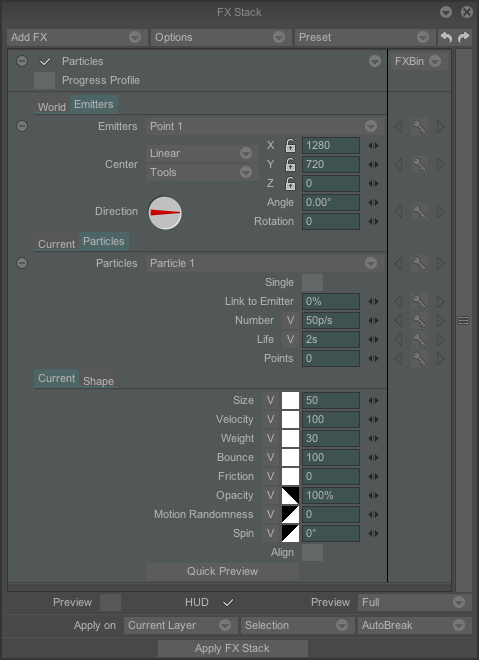 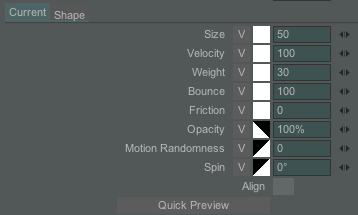 The most simple are Velocity and Size: any pre-defined example may be used to study these two notions.

The parameters Weight and Bounce are more subtle :

- The Bounce parameter is used to set the particle bounce strength (the Alpha Collision box of the World tab must be checked and a collision source chosen…).
Below: the Bounce of a tennis ball thrown left to right for different parameter values: 85, 100 and 115 (note that values over 100 cause unnatural bounces relative to the laws of physics…)

- The Friction parameter is set to slow the particles down. If the particles move through the air (which is most often the case), we are dealing with air resistance. The latter is low and a parameter set at a value close to zero will be sufficient.
There are, however, other situations : let's assume that the balls are thrown at floor level. These balls will slow down and stop due to the friction of the floor. If the same balls are thrown on a lawn, they will be stopped even faster.

The pre-defined example (objects > dice) also provides an interesting case: by increasing the Friction parameter to 180, and due to the fact that the particles grow smaller in size during their life span, one gets the impression that the dice roll on a surface and, after a certain limit, fall into a void.

- The Opacity parameter is used to set particle transparency.
This is very useful, for example, when you are animating soap bubbles: these wouldn't be perfectly opaque…

- The Motion Randomness parameter controls the movement of imperfect particles and accentuates the realistic aspect of the particle jet. It is used, for example, to create an uneven fog, movement of bubbles in the air, smoke, etc.
This parameter is used to avoid having to create too many FX Stack keyframes which would be required to render a trajectory uneven. This parameter comes into its own with the Variation parameter described hereafter. The pre-defined example (party > popcorn) uses this method.

- The Spin parameter controls particle movement around its local axis (the latter is defined in the Handle popup menu of the Shape tab which will be discussed below…)
Its use may provide various results. As required, study the pre-defined examples (objects > dice) and (objects > tetris).

- The Align parameter, if enabled, acts on the rotation parameter and directly turns the particles according to their trajectory.
See below : two particle jets with and without alignment. 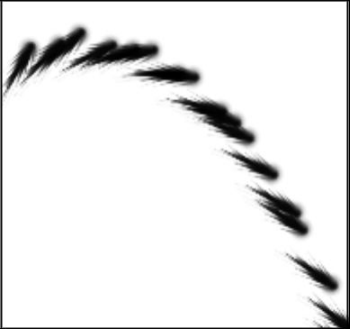 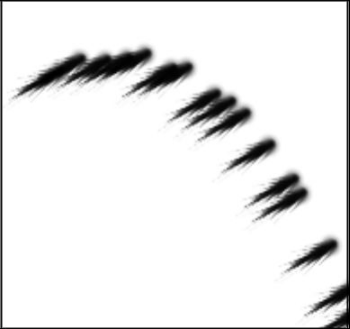 All parameters studied have the parameters Variation and Profile to their left. 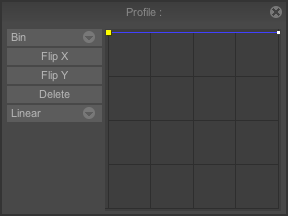 The profile preset is used to vary a parameter (Size, Velocity, Opacity, Bounce, etc. ) during the life span of a particle.

Click on one of the profile icons to open a traditional profile window.
We have already seen these when studying the drawing tools.

Let's take the pre-defined example (pyrotechnic > smoketrailc) shown opposite.
The three circled profiles below are those used in this example.
You will note that the particle behavior and profile size and opacity are well balanced:

* The smoke particles are small close to the emitter source and become bigger as the smoke dissipates in the air.

* The smoke particles are opaque at the beginning (yellowish-orange areas) and become transparent at the end (red-black areas).

* A parameter with the profile indicated opposite does not vary during the period the particles are displayed and remains at the value you have chosen.

The Variation represented by the V button is used to render the parameter with which it is associated more or less random. Click on the V icon to enter a numeric value in this field.

For example, if the particles Size parameter is set at 50, a Variation with a value of 25 means that each particle emitted will have a random size ranging from 25 to 75.

In the example given above (misc > plumefury), the variation function was used to attribute the particle Size, Spin and Life random values.

Combined with the Motion randomness parameter and correctly used, the Variation function provides excellent results. It is almost impossible to tell that a computer was used to create this effect!