This tab is used to define the type of particles to be used. 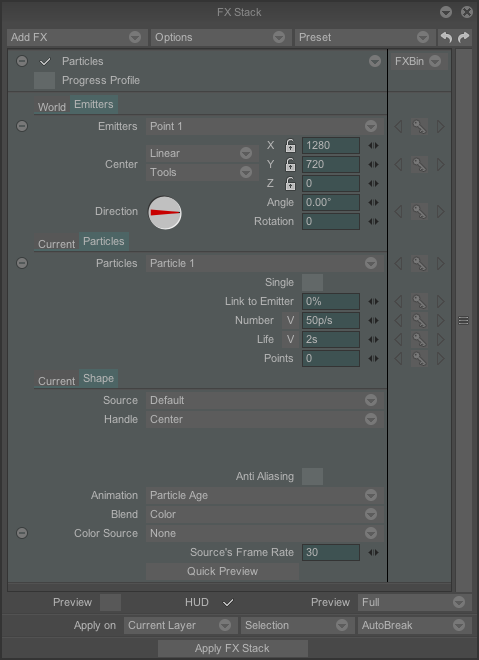 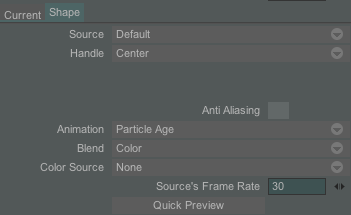 The Source popup menu is used to select either a default particle (circular with an opacity level decreasing towards the edges) or an image of your choice. When required, the image may be a brush, animated brush or current project.
In the case of brushes, you may select it using the file requester.

Opposite, use of the default particle.

The Anti-aliasing option allows you to finalize the general aspect of the particles. We have already discussed this when studying the drawing tools (lesson 4).

The Blend popup menu is used to choose the mode to be used when drawing the particles on the screen (color, behind, erase, etc…). Refer to the predefined example (nature > sun) for an example of how to use the Add mode. In lesson 4 you were given a detailed description of the drawing modes available in TVP Animation.

The Color source popup menu is used to modify the particles' color:

- The Color option is used to give a tint of your choice to the particles (use the Color box and Alpha parameter).
An Alpha value of 100% will totally change the natural color of the particles.

- The Gradient option is used to modify the color of particles emitted based on a color gradient (refer to the predefined examples: party > fireworks or misc > worma).

- The Mode menu contains some of the options already seen in the Animation menu above. However, these options do not apply to all consecutive elements of an animated brush, but to the colors of your particles in accordance with the color gradient chosen.
The color gradients chosen to be applied to your particles will depend on the choices you make in this menu.