The World tab is used to manage the parameters of the « world » in which our particles will move (see below). 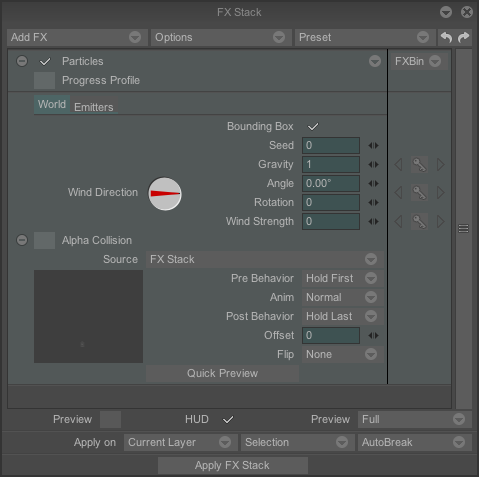 Two preview options are offered in the World tab: the Bounding box check box and the Quick preview button. 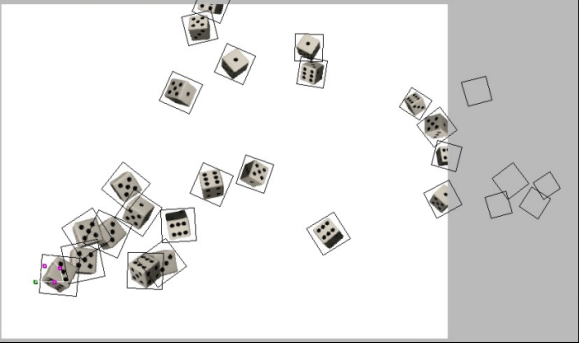 The Bounding box check box is used to display a colored rectangle around the particles present in the current project window when the preview button of the FX stack is enabled.

The particles going out of the project which are susceptible to come back under the influence of certain factors (wind, gravity, etc.) are also framed.

Although this option may render the preview a bit complicated when many particles are on the screen, it is very useful to distinguish the position of low-opacity particles. 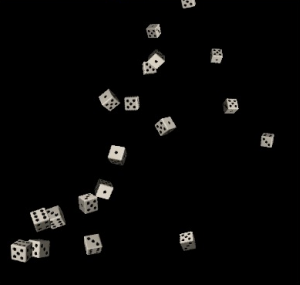 The Quick Preview button displays a window very similar to the one which allows you to choose a predefined set of particles.
Here, you cannot select a predefined example and any parameter modification within your effect will have a direct impact on the animation shown to you.

This is very useful to interactively view and modify a particle animation before applying the effect to all frames of a layer.
This button is present in all other tabs and sub-tabs of the particles generator effect.
The Seed parameter is used to generate a random particle emission using calculation algorithms. This parameter enables changing the rendering so that two effects which would be identical elsewhere are different. 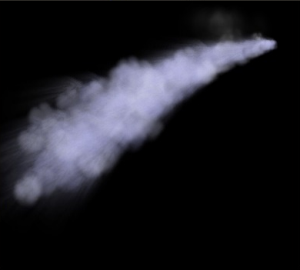 Select the pre-defined example (water >water jet) and copy it to the particles generator (see left).

In this example, our particles are water droplets projected from right to left.

Open the quick preview window. We will be able to study the influence of the various parameters available in the World tab on the movement of the latter.

The Gravity parameter is used to take the earth's gravity into consideration during particle movement. 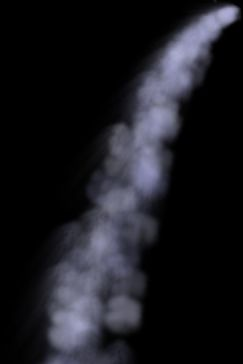 - When the gravity is increased to, e.g. a value of 10 , the water droplets will fall to the ground faster, because the distance between the emitter (water jet origin) and the drop point is shorter. 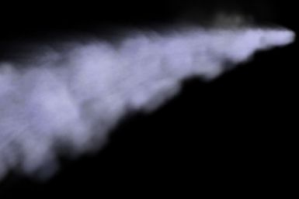 - Decreasing the value to 0.5 will increase the distance traveled by the droplets.
The distance between the point where the droplets are emitted and the drop point is longer. 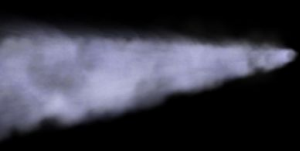 - When the gravity is set to zero, there is no gravity and the water droplets will follow a straight trajectory. 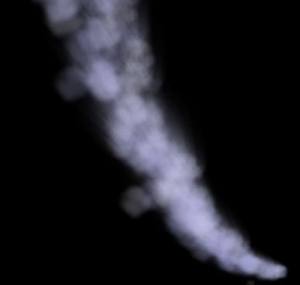 - TVP Animation offers the possibility to work with negative gravity values, which has the effect that the force of gravity may be inverted (the water droplets will then go up).

This is useful in certain cases, for example, to represent metal particles drawn by a magnet.

In order for the force of gravity to have an impact on our particles, it is necessary to attribute a Weight to them. We will come back to this when we talk about the specific particle parameters.

Let's take a look at the pre-defined example (objects > popcorn): the popcorn kernels are our particles and they move vertically to the top before falling back under their own weight.

The parameters Angle, Rotation and Wind strength allow you to simulate the impact the wind has on the particles (see examples below), and to make them more or less move in a direction of your choice (wind with a negative value affects the particles in a direction opposite to the one you have chosen). 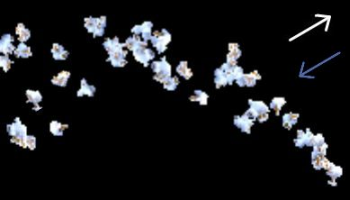 Note that using FX Stack keyframes will allow you, if necessary, to change the direction of the wind in time as well as its strength (to avoid creating a wind that is too uniform).

The Alpha Collision part is similar to the Source tab studied in lesson 15 when using the Keyframer. We will not go back to the concepts Source, Pre-Behavior, Animation, Post-Behavior and Offset.

There is, however, a functional difference: when the Alpha Collision box is checked, the particles will take into consideration the shape of the image(s) selected by you as source and, in case of a collision with one of them, bounce off them.

Draw a slope with an angle of approximately 30° with the horizontal line on all images of a layer with 120 images. In the particles generator, choose the pre-defined example: (objects > apples), check the Alpha Collision box and then select FX stack as source. To finish, apply your effect.

You will note that the apples bounce off the surface that you have just drawn!

This may be taken even further as the surface on which the particles bounce may evolve in time (for this, you have to choose an animated source).
It is even possible to modify the height of the particle bounce, as we shall see later.
Below, you find two summary illustrations for the trajectory of any object. 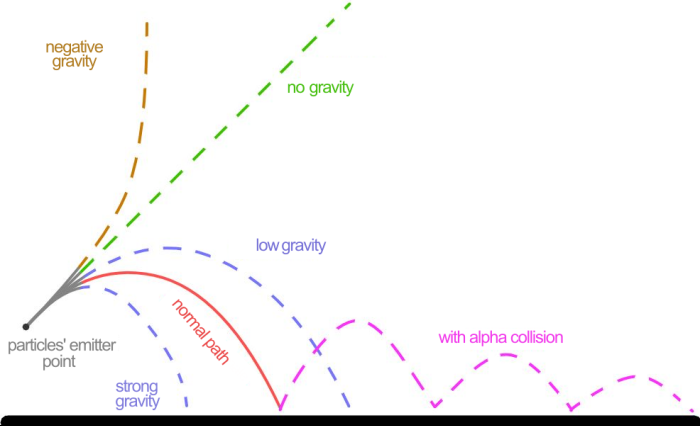 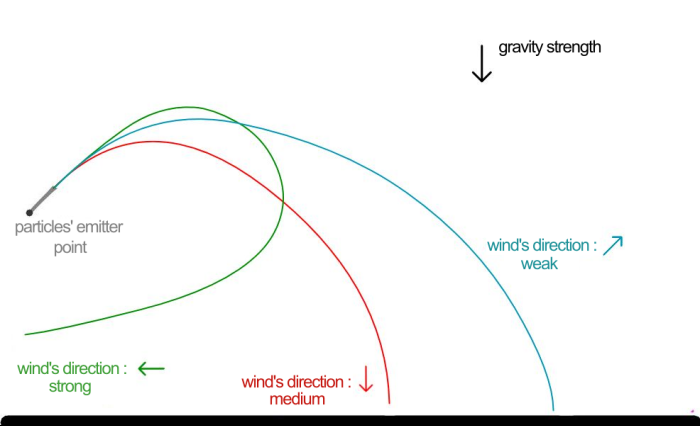