The Colors > Image Source effect allows you to display the image or the sequence of your choice on the current layer.
* The Source menu use all notions encountered previusly, in the Source Image notions chapter. As a consequence, you can choose to display the current layer, another layer, a paper, the spare image, another project, the current custom brush, etc.
* The Blend popup menu is used to choose the mode to be used when drawing the Source Image or Sequence on your current Layer (Color, Behind, Erase, ...)
* The Opacity parameter allow you to adjust ... the opacity of the displayed image or sequence.

This effect could seem simple, even obvious, but it has a lot of useful applications.

On the unique layer of our timeline, a "TVPaint" logo has been drawn. We are going to replace it by its own glow. 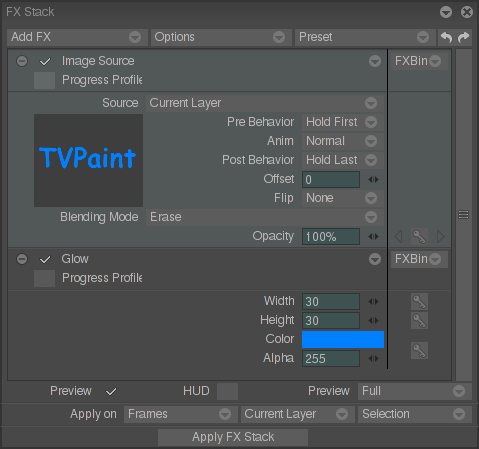 Let's take a look at the FX-stack opposite :

1) The first effect that will be applied is the Stylize > Glow effect.

2) The Colors > Image Source effect is the second effect that will be applied. The Source selected is current layer and the blending mode is the Erase Mode.

In this way, the "TVPaint" logo will be removed just after the rendering of the glow on the screen.

This process works with other effects of the Stylize group like Add Border or Bevel (with Outer option selected). (For the Drop Shadow and Toonshading effects, please study the next example)

In this example, we will create a shadow for the running kid thanks to the Stylize > Toon shading effect. This shadow will be rendered on an empty animation layer. 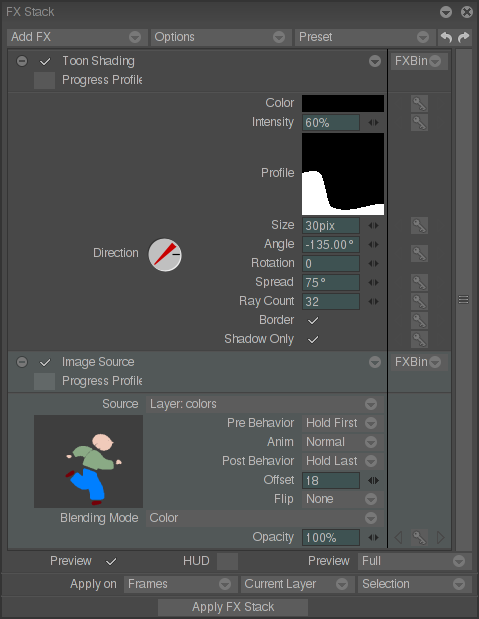 In the FX-stack opposite, the Stylize > Toonshading effect will be applied on the animated layer called “Toon Shading”. (see the timeline below)

The effect Colors > Image Source allows you to specify the reference layer used to render the shadow. Here, the Source is the animation layer called “color”.

If we use the Erase blending mode as we did in the first example, the shadow will disappear.

That's the reason why we will keep the Color blending mode and use the Shadow Only option of the Stylize > Toon shading effect.
It allows us to create the shadow of the running kid without re-drawing it.

It is then possible to generate a shadow for our running kid on a separate animated layer.
As a consequence, the character is not altered by the rendering of the shadow.

In this example, the Colors > Image Source effect allows you to define an image or an animation sequence as reference for the “following” toonshading effect in your FX-stack. 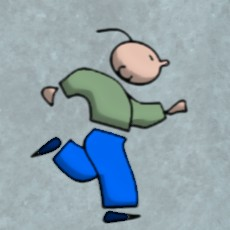 In this example, it is also possible to replace the effect Stylize > Toon Shading by the effect Stylize > Drop Shadow (the Shadow Only option is also present in this effect).
In that case, you will obtain a classical shadow. Of course, the character layers (colors and Running Kid) will stay unchanged.

Here is the 3D view of the layers you can obtain after using the effects Colors > Image source, Stylize > Drop Shadow and Stylize > Toon Shading. 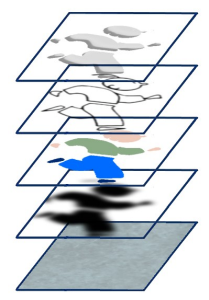 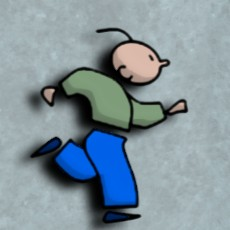