* If you have applied the Stylize > Mosaic effect, click Undo to cancel the effect and return to the unmodified animation.
* Go into the Options popup menu of the FX stack and choose Delete all.
Your stack is empty again.
* Select the Transition > Fade effect from the available menu.

* Import the project "Flowers" as a new layer, spread it over 30 images.
* Finally, go to the first image on the timeline, on the layer named "Palette" (see timeline below).
* Modify the value of the position parameter to 50% then apply the FX stack. 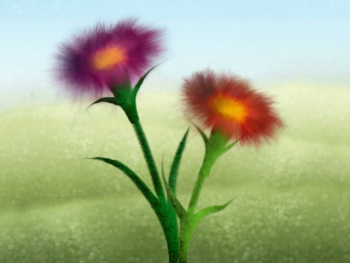 You obtain the following image: 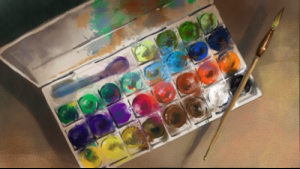 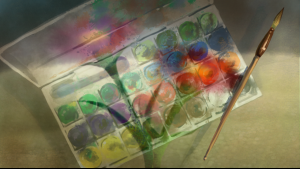 You have certainly understood that this effect creates a fade between the image of the current layer and the image on the lower layers.

However, this effect is applied to the current image (the first) and not to all the images of the layer… so let's remedy this.

Click on Undo to find the layer named "Palette" intact.
Now select all the images of the layer and apply the FX stack.
The effect now applies to the entire layer.
This is not perfect yet: the fade effect is locked at 50% of its progress for all images of the layer… It does not evolve in time.

To obtain a true fade effect on the screen, one has to apply the FX stack with a position value: 0% for the first image, 1% for the second, 2% for the third… and so on all the way to the last image…(assuming that our animated footage has a total length of 100 images… If not, complicated adjustment calculations must be made!).
At first sight this seems like a long and complicated process. Fortunately, TVPaint Animation offers tools which reduce this fastidious process to a few seconds: FX Stack keyframes.