You have probably noticed the Progress button under the name of each effect. This button is used to manage the speed at which the chosen effect will be carried out.

The Progress profile editor will then appear. 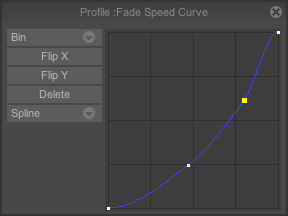 The interface of this window is identical to the one presented for brush profile setting in lesson 2.

The Bin and Spline menus, the Flip X, Flip Y and Delete buttons are the same as the ones you have studied before.

Let's go back to the fade effect in the "Palette" layer:
* Use the Undo option to recover the layers intact.
* Choose the same keyframes as those indicated in the chapter above.
* Draw the spline above before applying the FX stack.
After playing the project you will note that the effect is first carried out slowly and then at top speed (see timeline below). This corresponds to our spline: it rises slowly first and then very fast.

In the same way, if we choose the spline shown below before applying the FX stack, the Fade effect will be fast at the beginning and slower at the end. 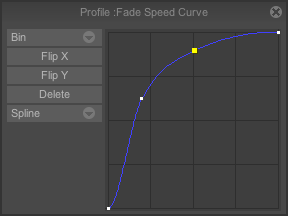 If we choose the spline show below before applying the FX stack, the Fade effect will initially be applied only to become inactive on our layer's last frames. 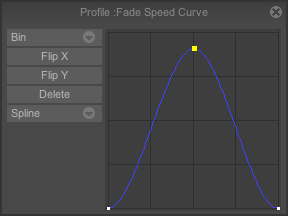