Load an image or animation

It is sometimes useful, when working, to load an image, video or animation which has not been saved in a format which manages layers as well as their layout and opacity, etc… (in other words, an animation which has not been saved in one of the formats TVP, MIR or AUR). In this case, a new panel, referred to as import footage panel, appears directly after selection of a file in the requester. This panel is as follows: 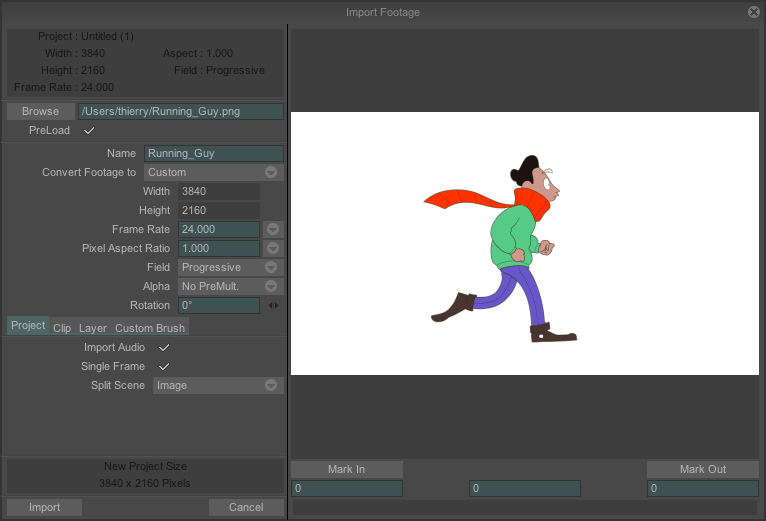 This panel is similar to the project modification panel.

Let's assume you have loaded a video file (AVI or MOV)
- On the top left-hand side of the import panel you will find all information relative to the file selected in the requester window (size, frame rate, aspect ratio, etc.).
- These are followed by a text field which indicates the path and name of the file you have chosen.
- The Browse button allows you, in case of error, to choose another file in the requester window.
- The Preload button will be discussed in the Dependencies section of this lesson.

Your video file may be modified when imported to suit your needs: project name, width, height, frame rate, aspect ratio, field, rotation may all be modified as we discovered in the previous section.

The Alpha popup menu, however, possesses specific options including: Guess, Premultiply, No Premultiply, Without alpha and Alpha only.
* The option Guess will consider that the Alpha value is equal to the maximum RGBA values present in the sequence.
* The option Premultiply refers to the method of calculating each pixel. In this case, each pixel is multiplied by its alpha value which results in the fact that these pixels are calculated quicker than with the No Premultiply option.
* The option No alpha will load your sequence without transparency if it had any beforehand.
* Finally, the option Alpha only will only load a mask of the sequence. This mask will be extracted from the alpha layer of the sequence.

Further down, three tabs allow you to choose the form to be given to your imported video: the imported video may be created either as a new project, a new layer in the current project or as a custom brush (these three options are mutually exclusive).

* When a video is loaded as a new project, three options are available:

- The video sample loaded will be that located between the two time markers on the right side of the panel. You may also choose to include sound with your video by checking the Import audio box in the import footage panel.
- The single frame check box, if checked, will create a project with a layer and a single frame: the frame selected in the right side of the panel.

The last menu (Split scene) has been explained in lesson 8

* When a video is loaded as a new layer or a new clip, a new set of options similar to those encountered in the Modify Project section becomes available. You may:
- Stretch your video file to fit the dimensions of your current project,
- Adapt the aspect of your video to that of the current project,
- Compensate for any possible frame rate differences between your current project and your video by stretching or contracting your video,
- Choose to stretch or contract with or without interpolation,
- Create a layer with a single frame (here again, a single frame or large sample may be imported between the mark in and mark out points).

* When a video is loaded as a custom brush, the same options are available with the exception of the Stretch to project size option.

When you load a file in PSD format, a new project is automatically created (no import footage panel is opened) and the image's layers are all present in the timeline.


You can easily retrieve the files you’ve recently imported or exported in order to load them again. To do so, simply click on the File > Recent multimedia files menu. From there, you’ll be able to go through your recently Imported and Exported files.

Note that these options will only appear if files have been loaded or exported.