TVPaint Animation allows you to capture images from a camera directly in the software in order to make, for example, a quick stop-motion sequence, or use it as a line-test.

In order to capture a sequence of images, you need to make sure that your hardware is correctly installed first. Then, you can open the panel Video Input via Windows > Animation > Video In Settings main menu. The other and quicker way to do it is to right-clic on the icon

which is located in the bottom right corner of your project window.

If your hardware is correctly connected to your computer, opening that panel will broadcast what is currently “seen” by your hardware in the preview window.

This is what the Video Input panel looks like: 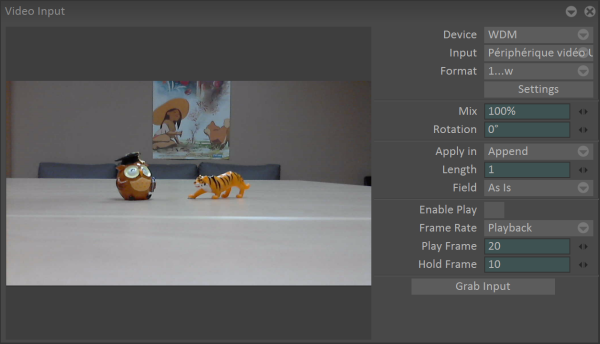 Device shows the video flow retrieved by the user’s OS, on Windows it shows WDM, on Mac Facetime, and on Linux V4L2.
Input can chose the source of the video input (very convenient if you have several cameras or webcams connected at the same time).
Format can choose the format of the image you are going to take, having a different format of image will not influence the project format.
The Settings button, located just below, opens the window where you can adjust your camera’s / webcam’s settings.
Mix is a kind of light table (very useful if you make stop-motion films.) It allows you to adjust the opacity of the input image visible on the drawing display.

Image acquired (on the left: drawing space / on the right: Video Input window)

Rotation can turn the angle to 0°, 90°, 180° or 270° (very useful when you use the Video Input panel to line-test an animation on paper. Rather than turning the camera, use the rotation with TVPaint). 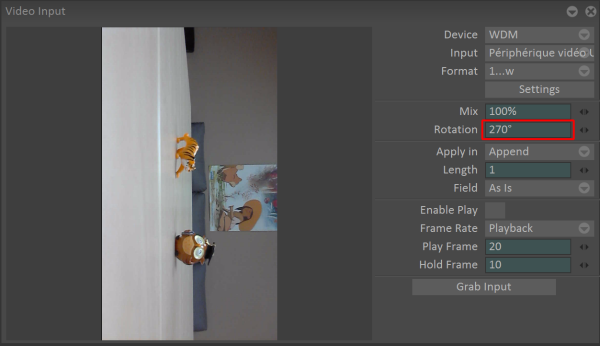 Apply in allows you to choose the destination of your acquisition:
- Append image: add a new image inside the layer.
- New layer: create a new layer with the acquisition inside.
- Current image: replace the current image by the new acquisition.

Length: you can type the duration of the instance. In the case shown here, there will be one exposure in the instance.

Enable Play: check this box allows you to play the whole clip (very useful, especially for a stop-motion film making)

Play Frame allows you to set the number of acquired images that you wish to see in the preview.

Hold Frame allows you to set the duration (in frame per second) of what the camera / webcam is currently shooting in the preview, along with the images previously acquired.

Finally, you acquire a video image by clicking on Grab Input.