In this lesson and the previous one, it has been seen that the layers are overlaid to create the final image of the project. 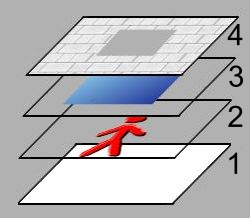 It is already possible to do it in some way, with a limited number of modes. When you drag a layer over another one and drop it, a popup menu appears and asks how the pixels of the dragged layer should be mixed with the other layer. But in this case, the two layers will be merged and the informations of each layer will be lost. It is often preferable to keep the layers separated.

The solution is to mix the layers but without needing to modify them. To do that, the layers should be mixed "on the fly".
There is a popup menu in each layer in the left side of the layers panel which allows you to select the way to mix the layer, it is called the Blending Mode.

And the final image is instantly displayed in the project window and without having to modify something in any layer!

All the Blending Modes are available on the left part of the layers panel with a left- or right click on its name.

The Standard Edition of TVPaint Animation only proposes the Color mode.