We will now study the first part on top of the Layer Preset Manager, which, as shown by the arrow on the right, will let you open a contextual menu, or click on Anim Layer to make it appear.

- The first option, New Preset, will let you create a layer according to your preferences with the functions available in the rest of the Manager that we studied beforehand. Named Untitled by default, it’s up to you to choose whatever options you want to create your own preset. 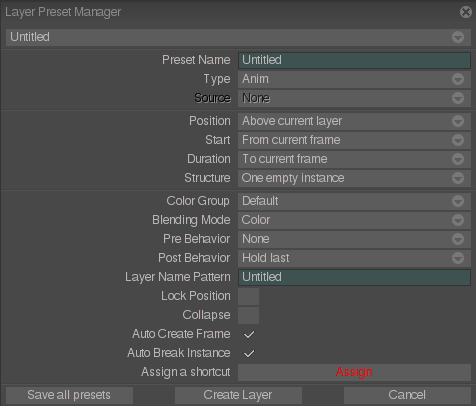 - You can see the list containing the four presets proposed by TVPaint Animation (Anim Layer, Background Layer…) and to whom your own presets will be added.

By clicking on the New button of the Timeline (or in the Layer > New Layer main menu), you will see that your Preset also appeared in the list with the four other presets.

- The Delete option will let you easily delete presets (whether TVPaint Animation’s ones or your own). 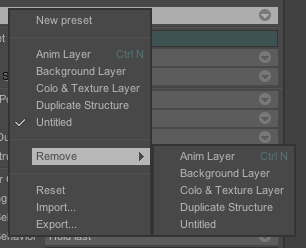 A warning will ask for your confirmation before deletion.

Don’t forget to click on Save presets to make this action definitive.

- The Reset option in the menu will let you go back to the original presets. The four presets proposed by TVPaint Animation will be restored (if you deleted them) and your own presets will be deleted. This action also requires confirmation.

Don’t forget to click on Save presets to make this action definitive.

- The Import function will let you import a preset that you would have created for another project for example, or one created by another user.

- The Export function will let you save any preset on your computer, external hard drive, USB key… The .ini file can be Imported and/or shared with other users.