I haven't watched the original 80s cartoon or the 2011 reboot, but I think this was a terrible move to make. Not only did they turn it into a comedy, but are using the CalArts style that so many cartoons are using nowadays.
Top

Not a show I'd care to watch (but I'm not the intended audience) . The original I barely remember as a He-Man wannabe show (never watched it) .

It's pretty much a thing actually. 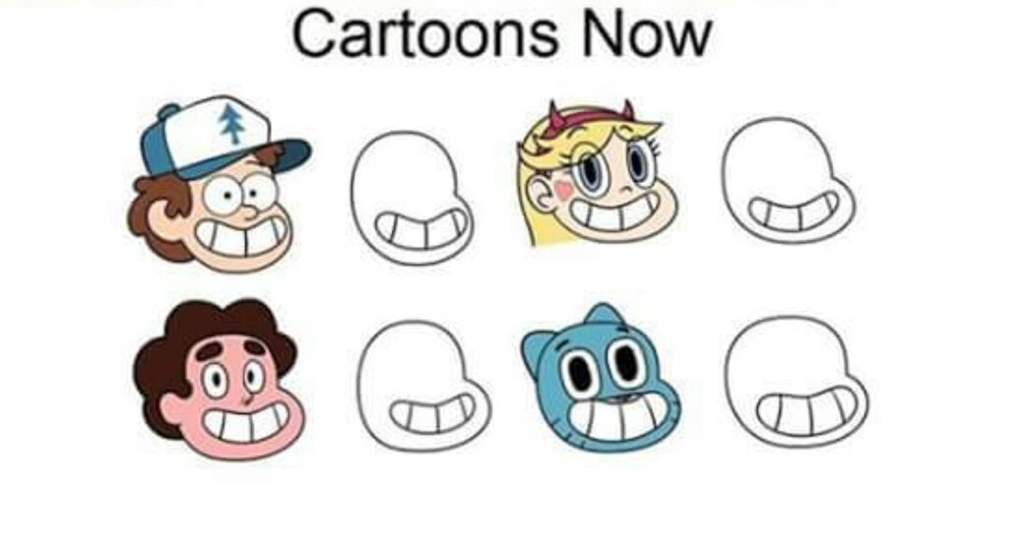 Yes, and I'm saying to you again, it's a false , made up thing from people with too much time on their hands.

It is assuming that the school consciously teaches a particular "style" and all students must rigidly follow it.

Now, it is certainly true that fads for certain types of films or certain types of design do come and go in different schools and students are certainly open to being
influenced by styles they see in the pop culture around them and from their fellow students , but it's always been that way , in every school . (the same thing carries over into professional work at
studios ... most people are followers/imitators, not innovators) .

But there is not some "manifesto" at Cal Arts to enforce a certain "style" of design .

The image you posted is humorous . I've seen it before. I get the point it's trying to make. A lot of these TV cartoons do look similar.

Too bad Steven Universe and Gumball weren't created by people who went to Cal Arts ... that kind of makes it fall apart ,
if the point was to prove that there is some sort of conspiracy to make all cartoons in "The Cal Arts Style" .

I've heard of a CalArts Style in the 90's, and it was completely different from this one.

I think the mechanism works like this: for whatever reason, different shows feature very similar styles at any point in time. At any given time, several CalArts alumni work on some of these shows. Correlation is not causality.
TVP 10.0.18, Mac Pro Quadcore 3 GHz, 16 GB RAM, OS 10.11, QT 7.7.3
Top

I think the mechanism works like this: for whatever reason, different shows feature very similar styles at any point in time. At any given time, several CalArts alumni work on some of these shows. Correlation is not causality.

The animation industry in L.A. has many people who graduated from Cal Arts . (it's a good school with talented students , they turn out a lot of highly skilled graduates) . If someone thinks because a lot of Cal Arts graduates work at many animation studios in L.A. means there is some conspiracy to impose a so-called "Cal Arts style" on the industry then they are just out of touch with how the industry works.

Here, VGMaster9 , maybe this will help:

I think it's a clever soundbite that perhaps may mean something a little different depending on the era, but it's really starting to snowball and I'm kind of agreeing with it to be honest. I'm just glad something or someone is finally pointing out how stale, cheap and juvenile (American) animation has become. Like with CN Real, these networks are just trying to kill off cartoons, they don't take them seriously, they need a CEO who does.

As for TC Roar, I don't know what the execs were thinking, they had a good reboot in 2011, good characters, writing, animation, appealing character designs (Pumyra!!) but CN mucked around with the schedule like Nick did with Korra, who the hell airs a new show at 6AM on a weekend? The moment they put it on Toonami it shined. CN didn't advertise it, put it on long hiatuses, the ThunderLynx toys were bad, like Cheetara's staff is made of cheap plastic it's like holding a piece of sponge, they had this fat magnet on their backs that restricts articulation, the other Bandai toys (6 inch) were a bit better but the face sculpt was bad and the colors were off, so if you're a child playing with them they sucked and if you're a collector the sculpt sucked.

No care was given, they didn't even make an intro sequence, I mean, it's not like Thundercats is known for that or anything...

There's nothing wrong with doing this style to Thundercats technically, but in Japan it's usually done alongside the main series, as a way of winding down after a season and providing pure fanservice, for example Attack on Titan Junior High but they even did it in America with The Last Airbender Shorts. They offer a relief before the start of the next season but they're still sophisticated, referencing the plot, etc but the characters remain as they were, they're not turned into derpy, dribbling morons. But there's no real Thundercats airing, so what's the point of Roar, to produce internet memes? Forcibly trying to manufacture a pop culture phenomenon? Capitalists copying success? These kinds of shows work because they lean on established characters, so when people say "its a kids show, its not aimed at you" it doesn't make a lick of sense, that means its a full on reboot.

Little Witch Academia is geared towards children, but even as an adult I can sense a sophistication in the writing, there are some adult jokes that kids won't understand, the animation is incredible especially those rotation scenes akin to Kill la Kill, the gags are genuinely side splitting and on point and the voice acting is full on, the toys are great, the statues are highly detailed with exceptional sculpt and color accuracy and it's funny, when you realise the pilot was made by amateurs on a govt programme to teach animation with some Kickstarter money and a bit of will.

A comedy cartoon doesn't need to compromise on story, emotion or animation quality for the sake of memes, sorry but there's no excuse, "its a kids show", "why is a thirty year old attacking a kids show", "its made for kids", yes, but so is this... and I spent hundreds on this show, and it wasn't targeted at me, it was just fun to watch and lightened my day.